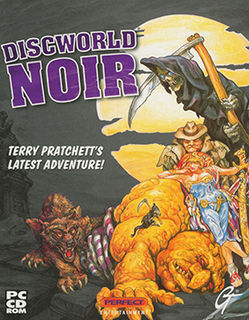 Discworld Noir is the third Discworld Adventure Game. It was made by GT Interactive and released in 1999.
Advertisement:

The game follows Lewton, the Disc's first and only Private Investigator. The game starts as Lewton is given a simple case to find a man. Since this is an Adventure Game set on the Discworld and acted out through a Film Noir genre filter, it soon becomes clear that there is far more going on.

While the game in many places is an Affectionate Parody of Film Noir, it also plays many of the tropes straight, even if they are given a unique Discworld spin.