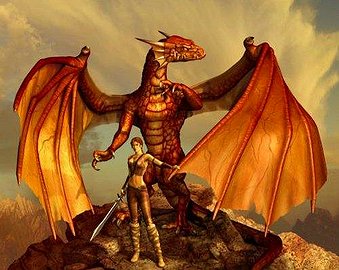 Drakan is a duology of Action-Adventure games from the defunct Surreal Software, consisting of Drakan: Order of the Flame for PC in 1999 and Drakan: The Ancients' Gates PlayStation 2 in 2002. Given how Surreal moved on to develop The Lord of the Rings: The Fellowship of the Ring and The Suffering duology, was bought out by Warner Bros., then merged into Monolith Productions, it's safe to assume that the series will never be continued.

In the first game, we are introduced to the main character Rynn, the resident Action Girl with a talent to use any weapon that falls into her hands. However, when Rynn's brother Delon gets kidnapped by the Big Bad Navaros' Legions of Hell, she realizes the need for More Dakka and seeks out the ancient petrified dragon Arokh, who already fought Navaros centuries ago. In fact, Arokh was part of the Order of the Flame, a fraternity of dragon-riding knights, which dissolved after Navaros was (seemingly) defeated. Hearing the latest news, Arokh (reluctantly) agrees to perform a Bond with Rynn, allowing her to ride him and thus resurrecting the Order. From there on, they proceed to kick much ass all over the world, defeating Navaros' minions to fight their way to him and Delon.

Gameplay-wise, Drakan consists of Wide-Open Sandbox-like exploration, though you are limited to a particular (fairly huge) stage of the game before you can advance to the next one. Each such stage is a large outdoors landscape, which can only be reasonably traversed on Arokh's back. The area, however, is dotted with ruins and dungeon entrances, which Rynn is often compelled to explore on her own because the entrance is too narrow for Arokh. Needless to say, the dungeons crawl with enemies. Rynn is aided against them by a vast assortment of weaponry, most of which break all too quickly, so you are forced to adopt new ones. Some enemies are found in the air, as well, particularly the enemy dragons who chose to serve Navaros. These have to be defeated in High Altitude Battles, and Arokh acquires their fancy breath weapons afterwards (one dragon, for example, breathes lightning).

The sequel starts a new storyline (after Delon died offscreen between both games): Rynn and Arokh arrive to the southern city of Surdana, which is currently under attack by an evil race of Desert Lords. It is revealed that although Arokh is now the Last of His Kind, there are more dragons hibernating in Another Dimension and only an ancient dragon like himself can open the eponymous Ancients' Gates to access it. He and Rynn are sent on a quest to find said Gates, awaken the dragons, truly resurrect the Order of the Flame, and fight back the Desert Lords.