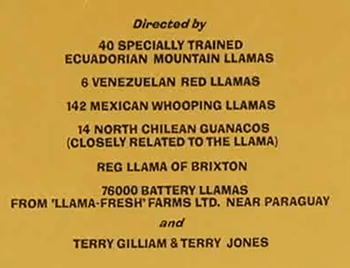 We apologize for the fault in the subtitles.
Those responsible have been sacked.
Advertisement:

Not to be confused with Creative Closing Credits or simply running credits over The Tag, The Stinger, or the Hilarious Outtakes, a credits gag involves a show making jokes within, about or upon the credits themselves. These may be a form of Couch Gag in a television series.

This is not just limited to the actual credits though, a film/series title gets this treatment too.

The end credits acts as one long-winded content warnign

The end credits acts as one long-winded content warnign