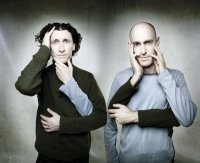 I am he and you are me and we are all together
Advertisement:

Australian comedians Shane Dundas and David Collins are the Umbilical Brothers. They met in a theatre class and decided one day that their miming class was "too quiet". Their humor is primary physical comedy and they make full use of stage lighting, imaginary people and objects, the audiences' line-of-sight, camera frame and sound effects. Their comedic timing is spot on and you can tell they spend hours upon hours perfecting their routines - even though their early work was largely improvised.

They have done several live shows Speedmouse, Don't Explain and THWAK! among others, and were a regular feature on The Sideshow. The Umbilical Brothers also had a television show geared toward children, The Upside Down Show, that was designed to be enjoyable for all ages.