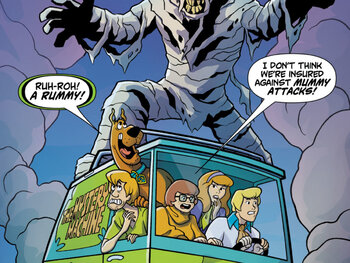 "Is it just me, or is there something eerie about Scooby? He's not anthropomorphic, exactly, he just speaks English. With a canine accent. It's as if trying to force his tortured vocal cords to form sounds that no loving God ever intended. Was he the result of some madman's blasphemous experiments in creating life? Are the ghosts he's chasing really the ghosts of his own inhuman mind? Should I get out more?"
— Lore Sjöberg, The Book of Ratings
Advertisement:

The sounds that the Speech-Impaired Animal makes in place of actual dialogue can vary. Sometimes their dialogue is semi-intelligible but has a very heavy Animal Species Accent. At other times, they make sounds accurate (or inaccurate) for their species, or no sounds at all, but their gestures and body language indicate what they would be saying if they could talk.

Like Talking Animals, they are still animals in almost every other way, particularly when it comes to instincts, priorities and motivations. They very rarely wear clothes, and they are often vocally proud of the fact they aren't human.

Many SIAs lack hands and walk on all fours, negating the possibility of performing many human tasks and behavior, though a few examples are bipedal even if their species isn't naturally so. However, when required by a joke, the SIA can sometimes act like the mostly anthropomorphic Funny Animal (Scooby dressing up in a costume to aid one of Shaggy's elaborate deceptions) or the semi-anthropomorphic Civilized Animal (Astro walking with his arm around George).

This trope is particularly associated with works by Hanna-Barbera.