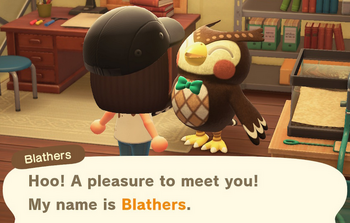 Animal characters who are able to talk (either in their own language or actually talking in human languages towards humans) sometimes have a special way of talking.

This often involves a Verbal Tic or accent based on an onomatopoeia of how they speak. For the Verbal Tic examples, a cat character saying "meow" (or whatever the language's version is) often. For the accent examples, sheep and goats will have their "ba-a-a-a" noise as their species accent, dogs have their "ruff" or "woof" sound as their species accent, the owls' accent consists of the "hoooos" they make, and snakes have a whole trope in how they overdo the "sssss" sound.

The Unintelligible and Speech-Impaired Animal examples can count as long as they are still speaking a human language or the audience can still make out some of what they are saying.

If the animal, instead, has a human accent based on its country of origin (such as kangaroos talking with Australian accents or pandas with Chinese accents), that goes under National Animal Stereotypes.

Subtrope of Fictional Accent. Supertrope to Sssnake Talk and Owls Ask "Who?". Supertrope of Trrrilling Rrrs when used to denote feline purring.