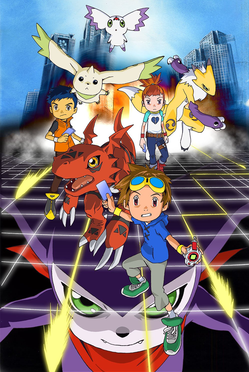 The third anime series of the Digimon franchise, Digimon Tamers was the first installment to set itself in a different continuity entirely.

Takato Matsuda (Matsuki in the dub) is an ordinary kid who is a big fan of the Digimon franchise and the associated Collectible Card Game. One day, a strange blue card transforms his card reader into a Digivice, which in turn brings a Digimon of Takato's own creation to life: Guilmon. But having a fire-breathing red dinosaur as a pet is only the start of Takato's problems: the walls between the Digital World and the Human World are beginning to break down, and hostile Digimon are appearing in the real world to wreak havoc.

Furthermore, there are other "Digimon Tamers" who have secured a Digimon as their partners in the real world: Ruki Makino (Rika Nonaka), a cold-hearted gaming champion who only cares about becoming the strongest Tamer; and Jianliang Li (Henry Wong), who believes that Digimon should be free to choose whether to fight or not. As the three Tamers clash over their conflicting ideals, a mysterious government organization is monitoring the digital invasion and developing counter-measures that could see the trio's Digimon partners ripped from their side forever.

Though it starts out similar in tone to previous installments of the franchise, it gets significantly Darker and Edgier as it goes along, with its last acts being conceptually inspired by Cosmic Horror Story and incorporating more philosophical themes. This is due to the influence of head writer Chiaki Konaka, who had largely worked on shows aimed at significantly more mature audiences, like Serial Experiments Lain and Hellsing, and also was influenced by the works of H. P. Lovecraft.

Tamers got a sequel in the form of an Audio Drama CD called Digimon Tamers 2018: Days -Information and the Unordinary-, showing the new threats on the rise! Taking place on the year mentioned in the title, organization NYX is formed, recruiting the main tamers but with Takato and Renamon missing from their respective sides.

Tamers then got another sequel in the form of a live reading simply titled Digimon Tamers 2021, featuring a new D-Reaper called Political Correctness that has the ability to censor everything from news to opinions.

Its predecessor was Digimon Adventure 02, and it was succeeded by Digimon Frontier.

The dub is now on DVD in the US.