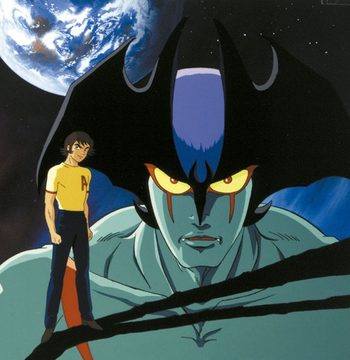 The hero of justice, Devilman.
Advertisement:

Devilman is an anime based on the manga Devilman by Go Nagai. Aired from 1972 to 1973 on Tokyo's NET (now TV Asahi) and affiliated stations across Japan, it premiered shortly after the manga's beginning and was produced roughly at the same time, but its story deviated completely from the start and only portrayed Devilman in a very vague light. Masaki Tsuji, a well-known screenwriter and novelist and a fan of Nagai's work, worked with him to adapt the storyline for television. The series was fairly popular in its day (its highest-rated episode rated 15.5%) but was soon overshadowed by the anime version of Nagai's Mazinger Z, which premiered late the same year on rival channel Fuji Television.

A scientist and his son are killed while mountain climbing in the Himalayas. Their deaths presage the awakening of the Demon Tribe, a race of beings of darkness who were frozen in ice a long time ago and who now plan to start a demonic invasion of the human world. However, unbeknownst to them, one of their own kind has betrayed them. After taking the boy's body as a disguise and moving with a human family, the demon falls in love with the family's young daughter, Miki Makimura, and turns back to his mission to cause death and destruction on Earth. Now turned into the heroic demon Devilman, he will protect her from many demons sent to destroy them.

Perhaps due to a combination of its themes and its age, the Devilman TV series is not as well known outside Japan as later iterations of the franchise, as its only TV broadcast in the West was in Italy (where it achieved great popularity) during the 1980s. It is now available in the United States in a subtitled-only release from Discotek Media.

Surprisingly, there is another Devilman manga penned by Mitsuru Hiruta using the anime as the basis of the story, but with slight differences (Akira being Spared By Adaptation for example), and generally Bloodier and Gorier despite its Lighter and Softer premise.