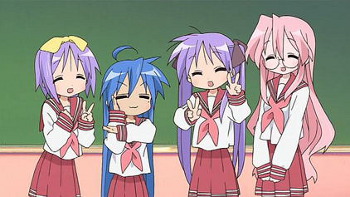 And there are four of them to boot.
Tomo: Question! Mr. Kimura, why did you decide to become a high school teacher?
Mr. Kimura: 'CUZ I LIKE HIGH SCHOOL GIRLS, THAT'S WHY!
— Azumanga Daioh
Advertisement:

Literally "a female high school student", but the term is invariably used to refer specifically to cute high school girls wearing Sailor Fuku, or sailor suit-styled uniforms. Many Japanese men refer to them under the nickname "JK" or "JC."note Technically, "JC" actually refers to junior-high-school girls. JS is "Joshi Shougakusei" or "grade-school girl", "JC" is "Joshi Chuugakusei" or "middle-school girl" and "JK" is "Joshikousei" or "High-school girl." Note that the term may be used interchangeably with 'seifuku', which means any general "school uniform", but is often used to describe the sailor outfits in particular. Although seeraafuku have been replaced by blazer-style uniforms in most high schools, the vast majority of anime girls still wear them.

That Japanese has such a compact, productive phrase for this image implies that it's an important archetype in the Japanese psyche, and this is borne out by how often sailor-suited school girls still appear in both manga and anime.

See also School Sport Uniform and School Swimsuit, for when the girls wear something that shows a little more skin.

This is mainly a Japanese cultural trope but is found prominently in anime. The Western equivalent is Catholic School Girls Rule. However, given that many Japanese high schools have abandoned the sailor uniform, which nowadays is a characteristic indicator of middle school girls, more professional-esque styles of uniform have become a popular replacement - popular not just among schools but also among viewers - so the two are beginning to merge. Joshikousei are very prominent in anime/manga, to the point where the vast majority of female characters will either be high school girls or at the very least be in the same age group (should high school not exist or should their occupation prevent them from going to school). In fact, one of the main reasons why most male protagonists are ordinary highschool students is so they can be surrounded by high school girls.