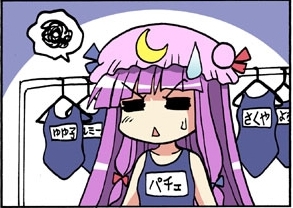 Patchouli thinks every girl should wear one.
Advertisement:

The Japanese school swimsuit (also abbreviated to sukumizu, pronounced sku-mizu, from "school mizugi [swimsuit]") is a staple of anime and manga. Generally speaking, it's a pair of trunks for boys and a one-piece for girls, at least in its most well-known pop culture depiction.note For girls specifically, expect to see either the skirted two-piece

◊. The two-piece swimsuit used to be used for every grade level, but after the competition swimsuit's introduction, it was more commonly used in middle and high schools, with elementary schools retaining a more modest version of the two-piece.

Because swim classes are often mandatory in Japanese schools, a standard swim uniform is required, so the dark blue one-piece is etched into the collective Japanese consciousness. When the term sukumizu comes up among fans of Japanese media, it's most often used to describe the girls' variation of the uniform.

While it is not particularly exposing, it nevertheless manages to serve as fanservice, as well as a prime source of nostalgia and moe appeal. Often, middle and high school swim classes serve as one of the first times students get to see their cuter classmates in something that shows their growing figures, and this memory, coupled with awkward early puberty hormones, is what makes this swimsuit memorable to people recalling their teenage years.

Most often, the sex appeal of a sukumizu is only applied to female characters, since Most Writers Are Male. It's not unheard of to have the male equivalent play the same role, but it's much more uncommon. In fact, even though the uniform is universally dark blue, it's not uncommon to see color variants for fanservice appeal, especially white versions, for somewhat obvious reasons. If a female character wears a school swimsuit during a Beach Episode rather than wearing a bikini, it is to show that she is more modest (or in some cases, more immature) than the rest of the cast. In Shōjo works, wearing a sukumizu outside of school is a major faux pas, and you can expect to have characters scrambling to get her proper swimwear lest she be seen as uncool.

Like with the School Sport Uniform and Sailor Fuku, the classic look of a sukumizu is a very common fanservice image that persists in Japanese pop culture, but doesn't quite reflect reality. Student complaints have led to the well-known, gender-divided swim uniforms being replaced with more modest unisex designs, which are more comfortable and easier to wear, as well as accommodating to gender non-conforming students. The new designs are slowly being rolled out

Important note: If image links are provided, please be discreet, tasteful, and/or discerning!