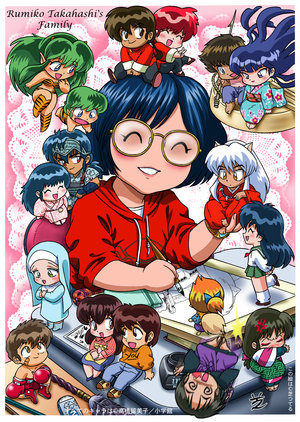 The artist and her extended family. [Source

Rumiko Takahashi (born October 10, 1957) is the best-selling female comic artist of all time, selling more than 170 million copies of her work in Japan alone, and one of the names by which to reckon the evolution of anime. She is one of the wealthiest women in Japan, all of her longer running manga have become TV series, and nearly everything she has written has been adapted into animation (OVA or TV). Due to this, she is the richest woman in Japan. Perhaps more importantly, her influence and the nature of her series since 1980 have been cited as large contributors to the perception and acceptance of anime as a medium today. Of course, every master was once an apprentice; Takahashi was a graduate of the Gekika Sonjuku program, a college course by Kazuo Koike, meant to teach people how to be a manga artist.

The animated adaptations for her longer series have an unfortunate tendency to end well before their source comics do – the Inuyasha manga ran for nearly four years beyond the anime's end (to put it in perspective, IY's English dub had been completed for almost two years at that point); Ranma ½ barely got two-thirds of the way through its story and was heavily laden with filler, to boot; and Urusei Yatsura's anime likewise ended early, although some of its later arcs were adapted as OAVs, and its proper conclusion was the subject of the fifth movie. Maison Ikkoku is her only major series whose animated adaptation spans the whole story. Inuyasha received a second TV series after the manga concluded – titled The Final Act, it picks up where the first TV series stopped and follows the manga to its conclusion (but heavily compressed).

She is noted for a distinctive stylized rounded style, sometimes to an excessive degree, intricate relationships among the characters, happy-ending weddings, barefoot characters, lots of Belligerent Sexual Tension, and an ability with puns and allusions on both visual and verbal levels. One example would be a character from Ranma ½ whose name, depending on whether the reading is Chinese, Japanese, or English (not to mention which kanji you're using), means "hair care product", "unpolished gem", "mountain girl", "she whose breasts are as mountains"… all of which describe the character in some way. (Oh, and she also happens to be a master of What Do You Mean, It Wasn't Made on Drugs? when it comes to certain elements in her mangas).

In stark contrast to her better-known comedic works, Takahashi has also written a number of shorter dramatic manga, many of which are grouped together under the collective name "Rumic World". She has also ventured into the macabre and outright horror with her Mermaid Saga.

In December of 2017, she completed Kyoukai no Rinne (or RIN-NE, in English) in Shonen Sunday, which has carried all her major works to date.†  (except for Maison Ikkoku, which ran in the seinen magazine Big Comic Spirits) May 8th, 2019, saw the premiere of her newest work, Mao.

Working non-stop since 1978, Takahashi has been given quite an impressive list of awards commemorating her service in the field, particularly in The New '10s: in 2016, she was inducted into the American Science Fiction and Fantasy Hall of Fame. By 2018, she had been granted recognition in the Will Eisner Comics Award Hall of Fame (having been nominated three times prior). And by 2019, the International Angoulême Comics Festival bestowed to her the Grand Prix de la ville lifetime achievement award. Thus far, she is the second woman and second Japanese person ever to win the almost-exclusively Franco-Belgian award.