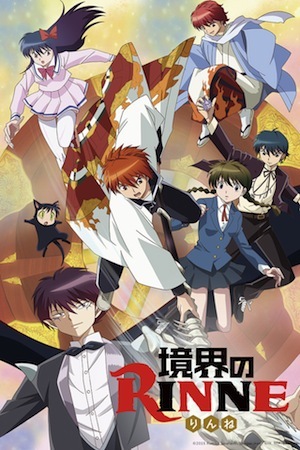 A manga from the legendary Rumiko Takahashi, begun April of 2009 in Shonen Sunday and licensed by Viz Media, who — in a first for manga — started releasing translated versions online at the same time that they came out in Japan (though the licensed online updates ended after the 2011 Tohoku region earthquake and tsunami). Par for the course with Takahashi, the series was a Long Runner, ending in December of 2017, over eight years after its debut.

The star of RIN-NE, known in Japan as Kyoukai no Rinne or "Rinne of the Boundary", is Sakura Mamiya, who has been able to see ghosts since an incident in her childhood. Now in High School, she views them as more than a nuisance than anything. One day, Rinne Rokudo, a student who has been absent since the beginning of the year appears in class, strangely-dressed and visible only to Sakura — yet after school, she finds him to be solid, unlike any ghost she has seen. Turns out he's a half human, half shinigami (or a grim reaper) whose job is to ferry souls to the afterlife, of which Sakura winds up accidentally going to. Luckily Rinne is able to guide her back, but it's not the last time she'll be seeing him.

What follows is shenanigans dealing with ghosts, yokai and fellow shinigami. Essentially Inuyasha without the serious bits meets the comedic silliness of Ranma ½.

It has an Anime adaptation by Brains Base that NHK began airing in the Spring 2015 Anime season and has been licensed by Sentai Filmworks for an American release. The series ran for three full seasons, ending in September, 2017.

for people living in the US, Canada, Australia, New Zealand, and Latin America.

Not to be confused with Re-Kan!, another show about seeing ghosts whose anime adaptation aired in the same season.