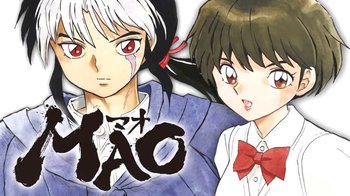 Ordinary High-School Student Nanoka Kiba, who had been in an accident when she was a child, is suddenly pulled into a world of conflict, travelling between the past and present, and assisting an exorcist named Mao.

A manga by Rumiko Takahashi which started in May 8, 2019. Not to be confused with the actress Mao Ichimichi who often is credited as M•A•O, the series Mao-chan, the game Mao etc.