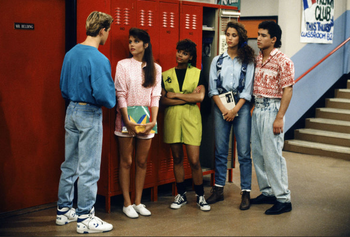 "High school is
Such a serious thing.
These pro-blems
Maaaaaaa-tter."
— Family Guy, on One Tree Hill
Advertisement:

There's something about secondary education — the nature of teenagers, the nature of the adults that work with teenagers, parents' expectations that things will be just like when they were a kid — that lends itself to the accrual of strange national customs. Every major country has its own, but as far as 90% of the entries on this wiki are concerned, only three countries' systems actually count — the US, the UKnote  It should be worth mentioning that England and Scotland have different systems, rendering 'British' confusing for actual Brits. and Japan. (Sorry, Germany.) The Canadian system (at least the Anglophone one) is basically similar to the US, the Irish system broadly similar to the British one (though it starts a year later than the British do), and the (South) Korean one similar to Japan (sorry, Canada, Ireland, and Korea.) This entry is primarily about the American one.

In the US, high school is usually the last four years of compulsory education (grades 9-12), although in some districts it's the last three (grades 10-12). In Japan it's three years (equivalent to grades 10-12), and not compulsory. In both cases students are likely to be coming from a Junior High, which consists of grades 7-9 (although not all US districts have those). In the American South and other regions of the U.S. grades 5-8 or 6-8 are called middle school, and elementary school ends at either grade 4 or 5 rather than at 6, as it does when the school district is zoned for junior highs instead of middle schools. In Russia, it's called "middle" school, "high" being the university, and lasts through grades five to eleven, being kind of conjoined with Junior High. For Britain, see The Good Old British Comp (though that isn’t the only option for teen-school stories in Britain by any means).

High schools in television tend to be cleaner, more modern, better lit, more architecturally interesting and have better food than most of their real-world counterparts. Obviously, there do exist real-world high schools which are large, spacious, space-inefficient, and brand spanking new, but as public school buildings tend to have very long operational lifetimes, these are in the minority.

The archetypical high school set consists of a single hallway lined with wide lockers, and three doorways leading to a classroom, the principal's office, and a rest room. An interesting note is that in Real Life, many high schools in the southern and western parts of the US are "open-air" — meaning, classroom doors open to the outside, and there are no hallways at all. It's egregious with the many high school-centric television shows set in California, a state which has almost exclusively open-air campuses. It should be noted that the big gothic-looking schools of film were designed for maximum heat in winter. In the Mediterranean climate where this is less of an issue, open air schools were built to keep classrooms cool, but once air conditioning became universal in schools in the 2000s, the trend went back towards one large building.

Television high school students spend an inordinate amount of time in a single classroom, which is not unreasonable given the likelihood that we will only ever see one or two teachers. Any student we care about will have his or her locker in the hallway immediately outside the only classroom. The former is actually Truth in Television in Japan and a few other countries where students are assigned to a class that stays in a set homeroom with teachers coming in and out depending on the subject.

If we see another classroom, 99% of the time it will be a thoroughly well-stocked science lab, often with trappings more appropriate to 30 years ago (or whenever the producers went to high school). Obviously, if done deliberately, this tends to be Author Appeal.

Rest rooms are always accessible to students, and it is not uncommon or difficult for one to spend time in the rest room of the opposite gender in order to hold a private conference.

Television writers seem unable to keep clear which conventions are specific to a high school, and which are more appropriate to a college (see also Elaborate University High). There are often times during the school day when a student may freely wander the building without having to be anywhere in particular, and can freely enter and leave the campus at any time. It is also common for a single class to be canceled, giving a student character some free time. All of these things may exist in some actual US high schools, but it is far and away more common for students to be required to remain in their classrooms unless given written permission to use the restroom or go somewhere else, and many schools even employ guards to stop students from wandering the halls or leaving the campus.

You will notice that the writers often base high school themed works off of where they went to high school, or off of popular stereotypes that are present in a lot of high schools. Part of the reason Alpha Bitch, Book Worm, and Jerk Jock tropes are so prevalent in these works is because everybody knew someone like that. (Detailed below) It's often heavily exaggerated, too, for Rule of Funny and Rule of Drama. As a result of how different all schools are from one another, there's going to be somebody in the audience saying "Have these guys ever actually been to high school?!"

Fictional American high schools are almost always named after historical presidents of the United States, with the more obscure 19th-century presidents (Fillmore, Polk, McKinley...) most favored though other famous historical figures may be used as well. Hilariously obscure or inappropriate figures (such as George Wallace or Dan Quayle) may be chosen for comedic effect. A high school named for the community where it is located (Sunnydale High) is often used to invoke a small-town or suburban setting and geographic names like Moperville North and Moperville South usuallynote although not always, and that particular example is actually an aversion indicate that a cross-town rivalry is going to figure into the plot. These are the most common sources of names for US high schools in the real world as well.

Class-times may vary to suit the needs of the plot, with the result that students may arrive to or depart from the same class to a destination which differs from episode to episode.

High schools seen in anime tend to be far more detailed than their American counterparts when they play any part in a story, but this may be attributed to the fact that there are only two or three basic school designs permitted by the Japanese government. Almost every school is identical to every other school, and thus viewers have built-in expectations about what they'll find to which the animators must cater.

As the high school setting is crucial to the formula of the show, producers often find ways to draw out the high school experience. Almost all shows start in freshman year. On Beverly Hills, 90210, an extreme case, the producers actually had the students go to junior year twice. Finally, the cast is often made to attend a California University to keep the group together.

Stereotypically, private schools are usually populated by extremely snooty smartasses with more money than they know what to do with. They also have to wear uniforms, and are usually single-sex. Public schools, on the other hand, are depicted as extremely poor, the children "run wild" and have dress codes instead of a strict uniform policy. As you can see, this sort of stuff is always heavily exaggerated because it's funny or dramatic.

A word about school dress codes here — from the mid-90s to the early '00s, an entire trend towards stricter dress codes and uniforms in American public schools has developed, peaked, and largely died out with hardly any notice from the creators of fiction. There are a number of reasons for this — it started after the creators were out of school, the Real Life version of this trend was more common in elementary schools (and never even considered as an option by some 80% of them), varied clothing helps in characterization, the creators want their cast to look cool to teen viewers, the actors can't wear golf shirts and khakis without looking like computer salesmen — the upshot is, if there's a strict dress code in a fictional American public school, chances are it's a Compressed Vice and probably also a Chekhov's Gun. The common "no-hat" rule was put in place largely to deter gang activity in kids. It's one of the few consistently accurate depictions of modern high school, perhaps because having actors wear hats makes lighting difficult in live action and is hard to render accurately through 360deg in animation.

In Real Life, school buildings often have additions that are designed with little or no attempt to match the existing building inside or out, making it possible for two or more completely different-looking regular-classroom architectures to exist in one school. This seldom happens in fiction because 1) they think it would confuse people, and 2) there's often only one "regular classroom" set and its decorations, orientation and such are changed as set dressing for scenes set in "different" classes.

High Schools of all kinds are the natural habitat of the Alpha Bitch and her Girl Posse, the Jerk Jock, the Sadist Teacher, the Popularity Food Chain, and numerous other hazards common to the teenage years.

Fiction tends to regard the High School and its students as central to the workings of the Universe. Adult characters will always look back on their high school years as either the best or the worst of their lives, and will remember every detail of their time in high school as if it had just taken place the previous day. This is generally not Truth in Television; most adults (or at least those who were not abused) barely remember high school, considering it as a relatively unimportant prelude to their real, adult lives. Other times they may hold an idealized vision of high school due to the Nostalgia Filter, blocking out all the stuff they hated about high school and only remember the stuff they liked. Despite this, high school is about the only experience that a majority of the adult audience is guaranteed to have in common, even if they failed to graduate.

A subtrope is Inner City School. When the High School days are overtly idealized, it becomes High School Rocks.