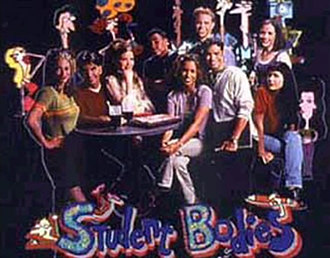 The cast with their animated counterparts.
Advertisement:

Student Bodies is a syndicated television comedy program produced in Montreal, Quebec, Canada from 1997 to the end of 1999 that mixed animation with live action.

The show was originally made for the American market and aired briefly in syndication (mainly to get Edutainment Show E/I credit), and also aired in Canada on CBC Television, Global and YTV. It featured an ensemble cast of high school students at Thomas A. Edison High School who run a school newspaper. The official school newspaper, in the words of the protagonist Cody Anthony Miller, sucks. The new girl, Emily Roberts, suggests that she and Cody start up their own, featuring Cody's irreverent cartoons. Other members of the cast include Cody's best friends, Chris Sheppard and Margaret "Mags" Abernathy, Romeo Carter, Grace Vasquez, and the two members of the rival newspaper group, editor Victor Kane and photographer Francesca "Flash" Light. There's also the Vice Principal, Mrs. Morton.