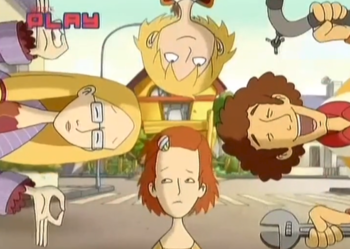 The Tofus is a Canadian-French animated sitcom that aired in 2004 on Teletoon and ran for 2 seasons with a total of 26 episodes. Co-produced between SIP Animation and CinéGroupe as the brainchild of Fabrice de Costil and Bertrand Victor, it is a satirical take on the granola environmentalist lifestyle.

The Tofu family is headed by Mr. and Mrs. Tofu (known only as Mom and Pop Tofu), environmental activists who decide their family needs escape from the urban routine, and thus move to a farmhouse in the town of Beauvillage to embrace a more natural way of life. However, their preteen children Chichi and Lola, who would rather watch TV and go to the mall than play with the farm animals, are not happy with this change of pace and really just want to be normal kids, despite their parents' all-organic, eco-friendly way of life. Rounding out the family are the kids' grandmother Buba (who was born on the farmhouse), and the pets Crackers the rooster, Curly the sheep, and Suzie the goat.

The Tofus provides examples of: