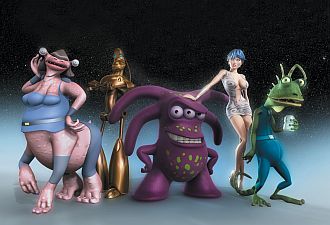 Tripping The Rift is a computer-animated sci-fi parody created by Chris Moeller and Chuck Austen (of "The Draco" infamy) in 1998 as a short film released on the Internet.

The film gained popularity, especially after being shown on the Sci Fi Channel, and was made into a television series in 2004 featuring a group of smugglers trying to scrape a living while going perilous adventures.