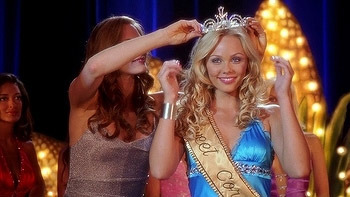 A staple of pop culture, a beauty contest/pageant is a competition where people (usually women, but there are special beauty pageants for men) are judged (primarily) by their physical appearance and social grace. In most pageants, contestants are expected to model an evening gown and a swimsuitnote The swimsuit portion may be omitted if the pageant features underage girls, display a performance talent, and answer an interview question about a current hot topic (it's not their opinion itself that's judged, but their ability to diplomatically express themselves). Expect the winner to be given a rhinestone tiara, sash, and scepter (and/or a bouquet of flowers) while the host sings her praises.

In fiction, if there is a Straw Feminist in the regular cast, she will complain about how she finds this sort of thing to be sexist and demeaning to women (which is actually a common complaint/criticism for beauty pageants). As these things go, she will often be forced to enter the competition for some story reason and is likely to learn An Aesop that there's way more to pageants than what a lot of people think, such as:

Historically, these events have usually been strongly heteronormative, and thus Always Female, although there is also a tradition of drag pageants in the gay scene, where female impersonators and their fans can enjoy the same sort of thing. Should a man disguised as a woman nonetheless happen to compete in a straight pageant, he'll usually end up doing quite well—at least until he gets caught and subsequently disqualified. Depending on the time period, and/or how conservative the organizers are, a pretty lesbian among the participants may face similar problems, especially if she gets too close to other hopefuls. More recently, transgender women have begun to feature in beauty contests, although this is still somewhat controversial in real life. Due to the potential struggles LGBT+ beauty queens face, this setting can sometimes be used as an approximate adult equivalent to the way Prom Is for Straight Kids works for a high school story.

In order to promote inclusivity and tolerance, most recent fictional depictions of a beauty contest will usually feature a very racially diverse cast. Thus, in addition to the sweet, blonde and blue-eyed all-American Girl Next Door (and her rival, the similarly complected but mean Alpha Bitch), expect the finalists to include a sassy black girl, a fiery Hispanic girl, a ditzy Asian girl, and perhaps a clever Jewish girl, as well as at least one cute lesbian girl (who may or may not be public about it just yet).

Child beauty pageants are notorious for the antics of Stage Moms, especially the ones who don't even bother asking their daughters if they actually want to compete in it.

Good place to murder someone too.