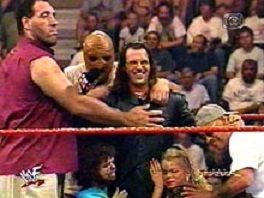 The Oddities were a Professional Wrestling Power Stable in WWE from 1998-1999. They debuted on the May 25, 1998 WWE Raw. The Jackyl walked to the ring with Hank The Angry Drunken Dwarf and Crackhead Bob from The Howard Stern Show to announce the arrival of his Parade of Human Oddities, bringing out Golga, "Princess" Luna and Giant Silva, though not yet named as such. The group would add Kurrgan, who had been the Breakup Breakout from The Jackyl's previous faction The Truth Commission. Sable replaced The Jackyl as the leader as he was phased out, with the Insane Clown Posse joining as well and recording their theme song. The group slowly fell apart, with ICP turning heel on their way out of the company, and Luna and Sable both abandoning the group. By the end, the group was down to Kurrgan, Golga, Silva and George "The Animal" Steele. All four guys were released in early 1999.

Not to be confused with WCW's rare oddities or MTV's Oddities.

"Everybody wants to see the greatest tropes":