Series / In the Heat of the Night 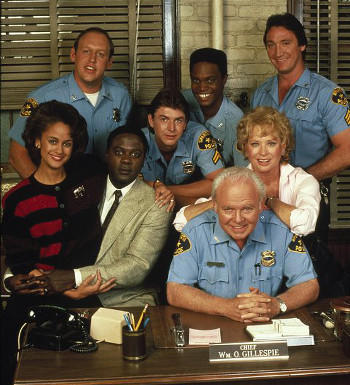 "Chief, maybe you care to explain that I can and will be going into that cell block. Or anywhere else I choose, when I choose. And we'd better get another thing straight. You will not call me boy. I want to like you people, and I want you people to like me. But there can't be liking without respect, and until there is that respect you will call me Mr. Tibbs!"
— Virgil Tibbs, "Pilot"
Advertisement:

The TV series picks up twenty years on, with a newly-married Detective Virgil Tibbs moving to Sparta, Mississippi after his mother's death. Turns out that at her funeral he was signed on as Chief of [nonexistent] Detectives by the town's opportunistic mayor. It's the 'New South', and everyone's anxious to seem racially progressive. Except, initially at least, his old pal Chief Bill Gillespie, and Gillespie's new (not to say considerably younger and hunkier) squad of flatfoots. Also, of course, several dozen bad guys. Like the parent film it pulls no punches with Southern racism, the seedy underbelly of small-town life, and the Culture Clash between big city detective Tibbs and The Sheriff Gillespie.

The series ran for five seasons on NBC before channel hopping to CBS for a further two seasons and four Made-for-TV Movies. It was kept interesting by brilliant casting choices, including Carroll O'Connor as Chief Gillespie and Howard Rollins as Tibbs.