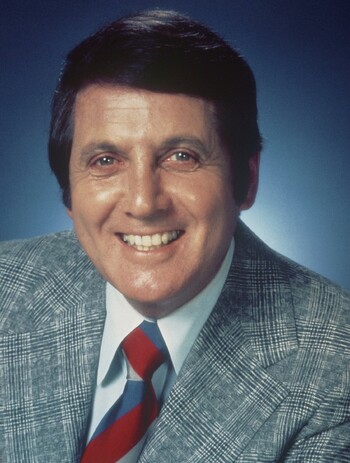 "I got a deal for you!"
— Monty's Catchphrase on Let's Make a Deal.
Advertisement:

Monty Hall OC, OM, born Monte Halparin, (August 25, 1921 - September 30, 2017) was a Canadian-American game show host and actor, most famous for his work on Let's Make a Deal, and the Monty Hall Problem it inspired.

Born in Winnipeg, Manitoba, he graduated from the University of Manitoba and started his career at a local radio station, after he married Marilyn Plottel in 1947, with who he would spend the rest of his life married. In 1955, he moved to America, and after a stint as the host of Video Village and Video Village Junior, he co-created and hosted Let’s Make A Deal, starting in 1963. He remained a staunch supporter of the series and its revival in 2009 until his death. He also developed and occasionally hosted other game shows under the Stefan Hatos-Monty Hall Studios banner.

Throughout his life, he would receive a plethora of achievements and awards, including a star on both the American and Canadian Walks of Fame, induction into the Orders of Canada and Manitoba, and the Lifetime Achievement Award at the 2013 Daytime Emmy Awards.

He died on September 30, 2017, at the age of 96, just four months after the passing of his wife. He was survived by his three children: Actress Joanna Gleason, Sharon Hall, and Emmy Award-winning producer Richard Hall.