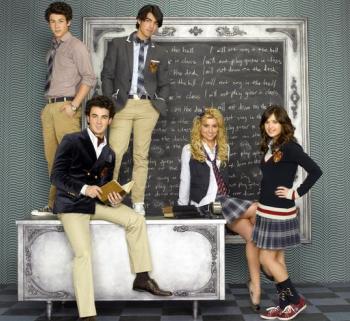 Jonas (2009 - 2010) is a Disney Channel series, starring The Jonas Brothers as fictionalized versions of themselves. They play the Lucas brothers, the three members of the fictional band "JONAS" who try to live a normal life in the face of stardom alongside their two friends: their stylist Stella, and their fan club president Macy.

When the show was picked up for a second season, the show was transported to Los Angeles, and the title was changed to Jonas LA. This season went for slightly over half the episodes of the first, and once it concluded the announcement was made that the show had been cancelled.