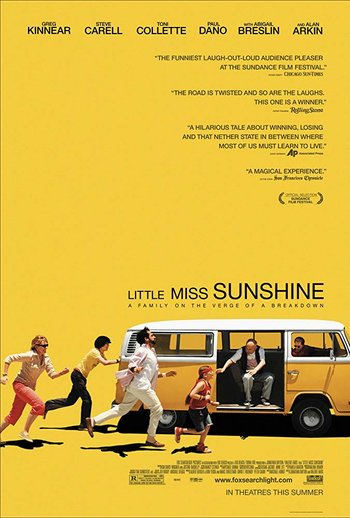 "A real loser is someone who's so afraid of not winning he doesn't even try."
— Grandpa

A Dark, dysfunctional and wildly hilarious 2006 family Dramedy about a Road Trip, directed by the husband-and-wife team of Jonathan Dayton and Valerie Faris.

Seven-year-old Olive (Abigail Breslin) wants to participate in the titular beauty pageant located all the way in California. So her parents, brother, uncle and grandfather all drive her there in the only transportation they have: a broken down bus that's already coming apart. All sorts of misadventures and complications occur along the way, involving Nietzsche, Proust, a stripper routine and a dead body.

Richard (Greg Kinnear), the father, is an aspiring but failing motivational speaker who has plunged all his time and money into his Nine Steps program. His wife Sheryl (Toni Collette) is a homemaker and mother of Olive and Dwayne (Paul Dano). Dwayne, Sheryl's son from a previous relationship, is a brooding teenager with an obsession with Nietzsche, who's taken a vow of silence until he achieves his dream of becoming an Air Force pilot. Olive is a precocious little girl with a close relationship to her grandfather. Edwin (Alan Arkin), Richard's father, is a dirty, debauched old man with a sharp sense of humor and irony. Rounding out the clan is Sheryl's brother, Frank (Steve Carell), a bitterly sarcastic scholar who just tried to commit suicide over losing his job and the man he loves.

Not to be confused with a certain yellow character from the Mr. Men series.