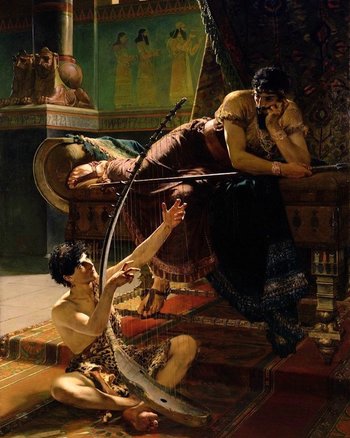 You consider me a young apprentice / Caught between Scylla and Charybdis
"'The love that dare not speak its name' in this century is such a great affection of an elder for a younger man...It is intellectual, and it repeatedly exists between an older and a younger man, when the older man has intellect, and the younger man has all the joy, hope and glamour of life before him."
— Oscar Wilde is fond of this trope
Advertisement:

Say Bob and Charles are not family, but are close to one another. Really close. Bob is younger than Charles, and Charles is quite happy to take Bob under his wing. He guides Bob to his place, whether in the world or simply in one social circle. However, Bob and Charles' affection for each other is a bit more than fatherly.

This dynamic applies to a gay male couple (or simply an ambiguous one) in which one partner is much older and acts as a mentor to another. In this dynamic, Charles is most often powerful and successful, and Bob is most often attractive in one way or another.

This trope originates in ancient Greece, with their custom of pederasty. The Greek words for this trope are "erastes" (lover) and "eromenos" (beloved). A very similar system developed independently in Japan, where the partners are the nenja ("man who loves") and his wakashu ("young person")note wakashu technically covers any boy between early childhood and adulthood, and was also used outside of relationship contexts, but by the end of the Edo period it pretty much meant "uke". High-ranking Chinese courtiers and Buddhist monks also took younger male "lovers" fairly often, but in a less formal system than in Greece and Japan. Greek accounts of the Persians, Spanish accounts of the Maya and Roman accounts of the Celts also all describe similar pederastic institutions, though in the latter two case this might have beento demonise the conquered cultures.

All but a Forgotten Trope nowadays, especially since some of these relationships involve underage teens, leading to implications that modern gay writers would rather avoid. It may, however, show up in The Twink's Coming-Out Story, and the social circle the older partner leads the younger into is likely to be the gay community.

If there's a significant age difference between them, see Age-Gap Romance. If the younger one has a preference for older partners, see Likes Older Men.