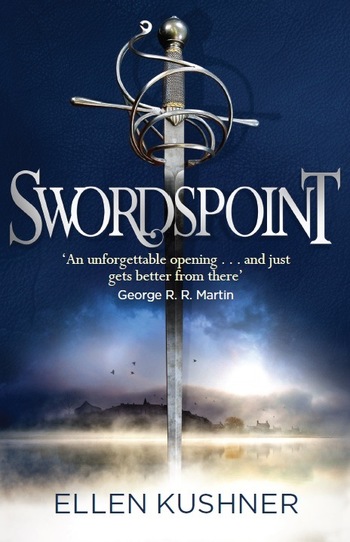 Swordspoint is a cult classic fantasy of manners (with elements of urban fantasy and heroic fantasy) written by Ellen Kushner in 1987. Later on, it saw two sequels: The Fall of the Kings (which was co-written with Delia Sherman) and The Privilege of the Sword. All three were critically acclaimed and are often held up as examples of a peculiar type of novel, with the basic setting of high fantasy but none (until The Fall of the Kings) of the magic.
Advertisement:

In Riverside, disputes are traditionally settled by swordsmen: hired mercenaries who battle one another on behalf of wealthy noblemen (or anyone with the ability to pay them). From the honor of a lady to whether or not a poet is terrible, the winning swordsman's stroke is considered the final say. But the reputation of swordsmen is in decline, with more and more matters being settled in court, while the swordsmen themselves become both romanticized and held in contempt.

Swordspoint tells the story of Richard St. Vier, the best damn swordsman in Riverside, and Alec, a university student (possibly from the Hill) who lives with him. When Richard kills two men in a duel in an aristocrat's garden, he finds himself embroiled in a rather unpleasant business. There are few he can turn to for help (which he likely wouldn't do anyway) because, every day, swordsmen become less and less respectable.

The Privilege of the Sword, set a generation after Swordspoint, tells the story of Katherine, a young noblewoman living in genteel poverty who is suddenly summoned to the city by her uncle, the Mad Duke. Katherine hopes that the summons means an upgrade in her marriage prospects, only to learn, to her horror, that the Mad Duke wants to dress her as a boy and train her to be a swordsman.

The Fall of the Kings is set a generation (give or take) after The Privilege of the Sword.

Tremontaine is the most recent addition, currently published by Serial Box. It's a prequel taking place roughly a generation before Swordspoint with a young Diane Tremontaine as one of the main cast embroiled in a steamy intrigue involving mathematics and chocolate.

Alternative Title(s): The Fall Of The Kings