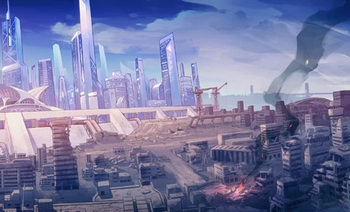 "For every city, however small, is, in fact, divided into two, one the city of the poor, the other of the rich; these are at war with one another."
— Plato
Advertisement:

Obviously, the entirety of a city cannot always be adequately presented in a work, and often there is no point in doing so, due to The Law of Conservation of Detail. However, since some diversity is needed, the City of Adventure you happened to end up in will usually be split into districts by their prestige level. Most often, there are three of them:

Notice that this also happens in real life. A glaring example is Detroit, USA, which is divided in rich North and poor South by 8 Mile Road, while many smaller western cities are divided in this way by the town's railroad tracks, justifying the phrase "born on the Wrong Side of the Tracks." Do note, though, that while income levels are by far the most common means of delineating areas within a city, Urban Segregation doesn't have to be by money lines: race (fantasy or otherwise), one's occupation (specialized trades like meatpacking or jewelry-working have a tendency to congregate close to each other in real life), and common tribal/clan lineage are other ways one neighborhood can become distinguished from the next (though, admittedly, differences in income and wealth usually end up happening anyway).

While real life segregation is mostly horizontal, a common sci-fi setting is a Layered Metropolis with vertical Urban Segregation — usually the poor live at the bottom in smog and darkness, while the rich live in the upper levels with sunlight and fresh air.

When applied to a school setting, it usually leads to an Absurdly Divided School.