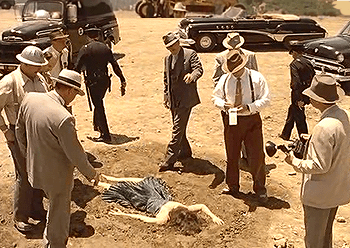 Sunshine Noir combines elements of Shining City and City Noir. The setting may be a Crapsaccharine World that looks a glamorous and glitzy place but it's filled with gangsters, drug deals gone wrong, undercover police officers, criminal drifters, violent youths; you name it. However, the setting does not necessarily look like a Crapsaccharine World.

This setting either tries to accentuate how lively it is, or is filled with beautiful sunshine and stylish chrome cars. Expect signs in the background (or the opening credits/title page of the story) to include a colorful neon font. Expect there to be a huge focus on vibrant, neon-lit nightlife in these kinds of settings. If not, expect to hear upbeat, poppy music playing in the background as undercover detectives bust a drug deal or as a young getaway driver makes his great escape. Often, in this setting, there is a juxtaposition of happy scenes set in broad daylight with events that would normally mark a Wretched Hive. However, unlike a Wretched Hive, this setting tends to be clean and polished. The setting in this peculiar type of Noir is usually a Vice City, that looks particularly fun on the surface, with charming characters and colorful and quirky fashions. However, it is, at its core, a Crapsaccharine World where dodgy dealings are the norm. May sometimes overlap with Cyberpunk. May make liberal use of Warm Place, Warm Lighting; expect orange and yellow filters.

This term was originally coined by Drive (2005) author James Sallis to describe his novels.

Compare Daylight Horror, the supernatural or Gothic Horror version. Not to be confused with film soleil, which is (roughly) quirky Neo-Noir in a New Old West setting.