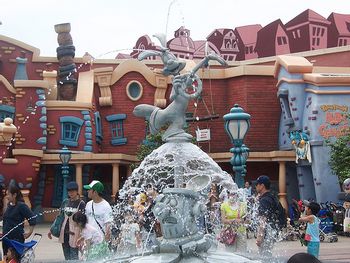 Smile, darn ya, smile!
Back when the world was a ball of ferns, when a good front lawn was a half-acre of bubbling slime, a giant amoeba split in two. The front half, the end with the brains, called itself Los Angeles. The butt end became Toon Town.
— Eddie Valiant, Who P-P-P-Plugged Roger Rabbit?

Cartoons are not real. They're made with art supplies and brought to life by animators and Voice Actors. It's sad but it's true.

Hey, wait a minute! We seem to have made a wrong turn at Albu-coiky! Now we're in Toon Town, that very special district of Fantasy Land where cartoon characters are people, just like you and me. Sometimes, they exist as a separate and independent species, and sometimes, the place itself transforms humans into Toons. But all details aside, Toon Town is a loony sort of place where Cartoon Physics and the Rule of Funny reign supreme. Expect the Roger Rabbit Effect almost every time.

When an entire planet or dimension is populated by cartoon characters, it is an Alternate Tooniverse.

Not to be confused with the MMORPG, Toontown Online.