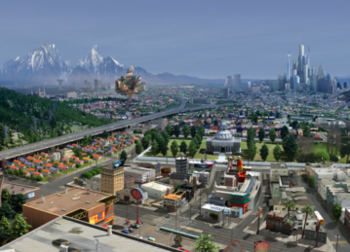 This is Cartoon Network.

→ Now, you're reading the description for "CN City".

→ This is TV Tropes.

Generally Speaking, bumpers are these standalone independent clips that are just a once-and-done sort of deal, but by tying everything together in this one setting, proper cohesion is achieved, and immersion can begin to thrive. A cohesive world is full of stories just waiting to be told, after all!
— Shadow Streak, A CN City Retrospective

The "CN City" era of Cartoon Network began in June of 2004 and lasted until June of 2007, though the era would continue abroad until 2010. The era is named after, and associated with, its animated bumpers made by Animal Logic and regular CN contributor Primal Screen. It succeeded the "Powerhouse" era and thus marked the closure of the Cartoon Cartoons branding.

These bumpers are shorts that show various Cartoon Network characters interacting together. They predominantly take place in a city (hence the name) comprised of various locales from CN series, with a few original establishments. The bumpers, along with a new logo and announcer, were introduced with this montage

What came afterwards varied depending on where you live. In the United States, the "Yes!" era gradually replaced it before being replaced in turn by the "Summer 2007" era, the "Fall" era, and finally, the "Noods" era. In Latin America, which saw the longest run of "CN City", The "Noods" bumpers would be imported to create the "Toonix" era. In Europe, the "Arrow" era would be adopted. In Asia and Oceania, a "New Wave" of bumpers would begin. All of these would eventually converge into the "CHECK It" era of bumpers which continues to this very day.

About eleven years after the bumpers stopped airing, the city was featured as the setting of the OK K.O.! Let's Be Heroes episode "Crossover Nexus", in which K.O., Garnet, Ben, and Raven join forces to save the city from a supervillain bent on eradicating heroes, with several other CN characters new and old (even a few from CN Latin America productions) making cameos. The show's Grand Finale "Thank You for Watching the Show" would see a brief return to the setting to squeeze in a few more cameos.

As that brief comeback indicates, this particular era of bumpers proved quite popular with fans due to the crossover premise and unique setting and style, leading to many re-circulation efforts. YouTube compilations are plentiful, This fan-site

serves as an in-progress archive of various bumpers, and the Lost Media Wiki is working to recover several bumpers from this and other CN eras.

Eventually, the director of these bumpers

would release HD masters of most of these bumpers

Major appearances (shows that had their own set of bumpers)

Minor appearances (characters cameoed on signs, posters, and the like, or else via clips)

"Crossover Nexus" and "Thank You for Watching the Show" exclusive cameos:

These bumpers provide examples of:

Mandy manages to get away with letting one out in the elevator without being found out by the other toons in it.

Mandy manages to get away with letting one out in the elevator without being found out by the other toons in it.