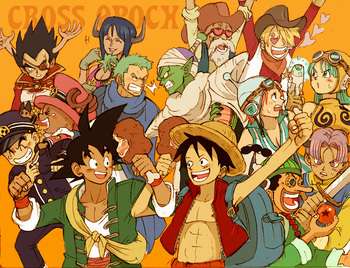 No, this isn't a fanfic... but it's not very far from being one.
Advertisement:

A One Piece / Dragon Ball crossover, created by Akira Toriyama and Eiichiro Oda. Cross Epoch was released on December 25th, 2006 in the Weekly Shonen Jump, and it appeared in the April 2011 issue of the English Shonen Jump 100 issue.

Long story short, Shenlong granted Mister Satan's wish to become a King. After that, he invites his friends to a tea party. The story then follows various pairs as they make it to the party.

The story is so out of place it could be a Crack Fic.