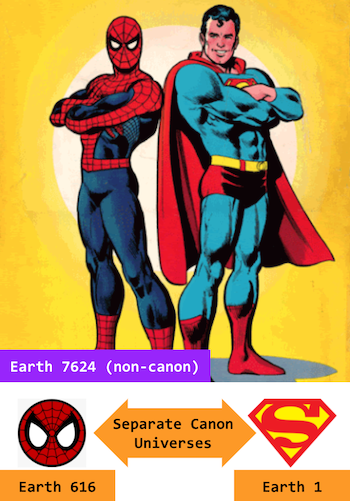 With great power, comes great discontinuity.
Some crossovers start a storyline in one piece of media and finish it in another. Others bring existing characters to the same place. A crossover alternate universe is where a universe is created solely for the purpose of bringing together characters for whom the above two options aren't available.
Advertisement:

This usually happens for one of the following three reasons:

1. A fake crossover is needed. The writers can't simply transport all the characters to an existing universe due to plot necessities or copyright reasons.

2. The original work is not ongoing. It would be impossible to have the characters pop up in existing stories. This is common in Fairy Tale Free For Alls and other works involving public domain characters.

3. The writers need to give the characters backstories different from what they are in their original stories.

Usually (but not always), the universe isn't used again after the crossover finishes. Subtrope of Alternate Universe.