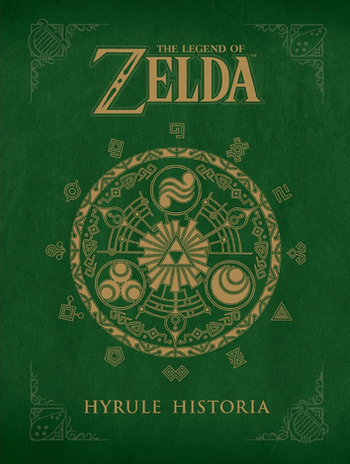 The Legend of Zelda: Hyrule Historia is the first behind-the-scenes guide for the Legend of Zelda series. Written primarily by Shigeru Miyamoto and Eiji Aonuma with additional notes and artwork from other members of the series production team, it describes the design process and ideas that went into every game in the series with a primary focus on The Legend of Zelda: Skyward Sword, which it was released to promote. It was originally published in Japan in 2011 directly by Nintendo, with translations released in the US by Dark Horse Comics, in Spain by Norma Editorial and in Germany by Tokyopop in 2013.
Advertisement:

The book is divided into three main sections. The first covers a hefty amount of material that went into Skyward Sword, including scrapped designs for almost every character in the game, as well as characters that didn't make the cut. The third section covers the production of previous games in the series, but with far less content due to much of the production notes and artwork being lost in backroom filing cabinets, desk drawers, and simply being destroyed. The most anticipated (and controversial), though, is the middle part of the book. The long debated Legend of Zelda timeline was finally released in its entirety, confirming many theories while debunking others. The kicker, though, was the inclusion of a third branch to the otherwise agreed-upon split following Ocarina of Time: created from a hypothetical scenario where Ganondorf successfully defeats Link in Ocarina of Time, this "Downfall Timeline" encompasses the classic series (original through Link's Awakening) plus the two Game Boy Color titles.

The standard release version of the book included a single chapter Skyward Sword manga which, surprisingly, does not cover anything from the game itself, but instead shows the prehistory of the game's world from before Skyloft's ascension, along with the first incarnation of the Hero's Spirit. The original Link, born thousands of years before Skyward Sword, has gone from a champion of the kingdom to a framed prisoner who must save the kingdom from Demise's army with the divine Master Sword at the cost of his own life, putting the cycle of the series into motion. The Limited Edition, bizarrely enough, omits this despite otherwise having all of the same content of the original but with a leather-bound cover. It should be noted though, that whether this story is canonical or not is heavily disputed, at best.

Hyrule Historia would be the first of the Goddess Collection artbook trilogy, with Art and Artifacts and Encyclopedia being released a few years later. At the end of 2018, a Breath of the Wild-focused follow-up, Breath of the Wild — Creating a Champion, was also released.

Due to the nature of the book's content, there are a lot of spoilers. For the purposes of this article, many will be unmarked.