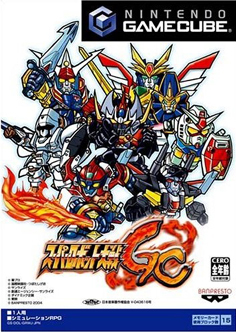 Like the Sega Dreamcast port of Super Robot Wars Alpha, GC plays the Video Game 3D Leap by using fully 3D battle animations and is the only game to feature multiple Hit Point bars on all units. Aside from the primary HP bar representing the "body", the "head", "arms" and "legs" of all units are also given HP values. By targeting specific parts of a unit, it may be disabled during combat scenarios rather than become destroyed. Additionally, disabling enemy units allows the player to capture them and add it the playable roster or sell the machine for credits or turned into equippable parts.

Finally, in a similar vein to the Stat Grinding system used in Final Fantasy II, GC features the "Skill Ace System", wherein pilots will earn bonuses to stats and other attributes by repeating certain actions during scenarios, such as using melee or ranged attacks, successfully evading or hitting enemies, dealing Critical Hits and casting "Spirit Commands".

A complete Fan Translation was released in May 2021.