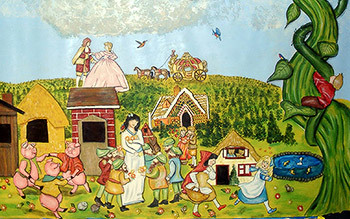 "Go to the wood and bring me back:
One: the cow as white as milk
Two: the cape as red as blood
Three: the hair as yellow as corn
Four: the slipper as pure as gold..."
— The Witch, Into the Woods
Advertisement:

Fairy tales, fables, nursery rhymes, and folktales are a major part of literary canon in all parts of the world. Everyone knows them from their childhood, they're popular targets for adaptations, they're considered "timeless," and in the eyes of most people, will never get old. Add into that the fact that many of these stories exhibit similar character archetypes (eg. princes and princesses, fairies), settings, and story patterns, and you've got yourself ripe material for crossovers.

A Fairy Tale Free-for-All is a Massive Multiplayer Crossover of many different fairy tales. Because many similar characters exist in many of these stories, expect different "incarnations" to in fact be the same person. (Popular targets include The Big Bad Wolf, the various Wicked Witches, the many Jacks of literature, and Prince Charming — often including the obvious infidelity this implies.) Very rarely are the fairy tales themselves played straight, though; expect Deconstruction at every turn. Fractured Fairy Tale is not necessarily in play, but it's far from uncommon.

The exact nature of the story can vary between incarnations. Sometimes the stories will be told as they are known, intersecting where appropriate. Other times, the characters from various tales will be transported into a different story. Sometimes, a mixed approach is used, transporting characters from one tale into another, or having them hop from story to story over the course of the plot. Any way it's done, the effect is the same: what would happen if our favorite characters met each other?

The fact that these stories are virtually all in Public Domain and therefore lawsuit-proof is another attractive factor about them to creators. On the other hand, it may be subject to Small Reference Pools, as there's only a limited number of myths and fairy tales that general audiences will recognize without prompting. Because of the inherently fantastic nature of fairy tales, this will frequently overlap with Fantasy Kitchen Sink and All Myths Are True.