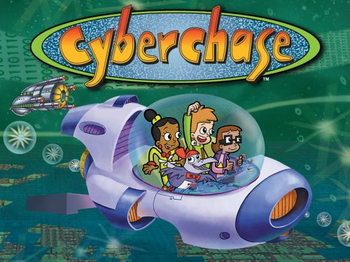 Cyberchase is an Edutainment Show that has aired on PBS since 2002, with the thirteenth season coming out in 2022. Until 2007, the show was a co-production of WNET New York and Nelvana of Canada; WNET has produced the show on its own since then.

The series revolves around a trio of kids, Jackie, Inez, and Matt, and their robotic bird friend (known as a "cyboid") Digit (voiced by Gilbert Gottfried), who go Inside The Internet. They have been called upon by Motherboard to help defend and repair Cyberspace from the evil schemes of The Hacker (Christopher Lloyd), who is not a playful one, or even human, but an evil cyborg whose goal is to conquer all of Cyberspace and spread chaos. The Hacker used to be Motherboard's assistant; however, he went rogue, was exiled for trying to destroy her, and returned to download a virus into her. Luckily, her firewall was able to stop the damage from being too severe, but still left her in a weakened state, thus forcing her to recruit Jackie, Matt, and Inez from Earth to help defend Cyberspace.

Most episodes involve the children traveling to a unique or recurring "Cybersite" (a planet-like body in Cyberspace) to thwart the Hacker's latest scheme.

On PBS airings, the episodes end with a live-action segment called Cyberchase For Real, where a pair of recurring characters, Harry (played by Matthew Wilson) and Bianca (played by Bianca DeGroat), and sometimes their recurring nemeses (Harley and Sleazé), demonstrate how the episode's math lesson can be used in their own lives.

After a 3 year hiatus, the series premiered its ninth season in November 2013. The episodes from this season onward focused on environmental and ecological themes.

Has no relation to Scooby-Doo and the Cyber Chase.