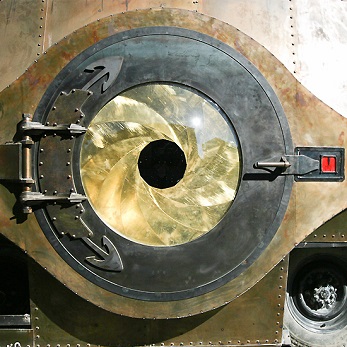 The door dilated.
— Beyond This Horizon by Robert A. Heinlein
Advertisement:

This trope refers to a particular sci-fi convention of connoting a "futuristic" setting with doors and hatches that open in unusual, hi-tech ways — doors that dilate like an iris, doors that slide up into the ceiling, doors that dissolve and rematerialize... Apparently, plain old hinges are extinct in the future.

Outside of this wiki, "Dilating door" is science fiction Fan Speak for the more general trope that we call "Cool, but Inefficient". This is a reference to Heinlein's advice that you could evoke a futuristic air by casually throwing out details like "the door dilated", as if such things were nothing to really notice.

Subtrope of Our Doors Are Different.