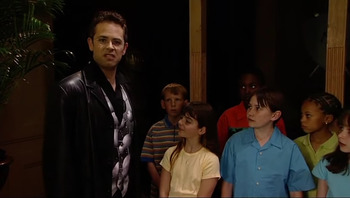 Bad Man in the mansion with some kids.
Pay attention, it's Maths Mansion
The game show where you get to test your maths ability!
Feel the tension, in Maths Mansion
Let's see how good at learning maths these kids are gonna be!
If they want out, then they must earn it
There's no leaving, 'till they learn it!
The only way of getting out is mathematically! (Evil Laugh)
— Opening theme
Advertisement:

Maths Mansion is a British math Edutainment Show that lasted 4 seasons from 2001 to 2003 with 40 episodes in total.

Bad Man locks a group of kids inside Maths Mansion. The kids have to solve math questions correctly and earn Maths Cards. When they earn enough Maths Cards, they are allowed to leave the mansion and go home.

Sad Man interrupts the show to happily sing and play math games with his puppets, and Bad Man tries to get the viewers to look away from Sad Man. Bad Man also leaves the mansion to ask people on the street to solve math problems.

Remember, no leaving without learning.