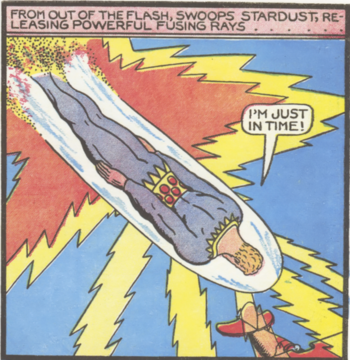 "Simmons, you get an F in efficiency, but I have to give you an A+ in dramatic timing!"
— Sarge, Red vs. Blue

They're in deep trouble. The Dragon or perhaps the Big Bad himself have them cornered, their heaviest hitters worn out. Their enemy is just about to unleash an attack that will no doubt kill them.

Alternately, the hero is in dire straits until The Cavalry and his ragtag band of acquired friends arrive to save the day.

A Sister Trope to Big Damn Heroes. A sports variety is Down to the Last Play.

Contrast You Are Too Late, Remembered Too Late.

No relation to the eponymous time-traveller, Justin Time (which is just a pun on the term).

If you're looking for animated television series seen on PBS Kids Sprout or Disney Junior depending on where you live, go here.