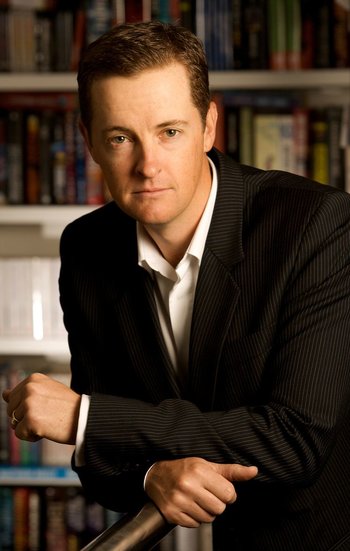 To anyone who knows a writer, never underestimate the power of your encouragement.
—Matthew Reilly
Advertisement:

Matthew John Reilly (born 2 July 1974) is an Australian author who writes extremely fast-paced action novels. His books have been compared to Indiana Jones on fast forward, with some of the wildest and most sustained battles in an action thriller. His books often contain many examples of both fictional and real-world firearms and military technology, simply for plot advancement. They also usually contain multiple explosions and could be described as 'What can we blow up this time, and how can we make it more awesome?'

His books are written more like action movies than traditional thrillers; he likens them to stripped-down sports cars. Great literature it ain't, but the bottom line is the Rule of Cool. Reilly admits this, and says that the most important thing is that his books get people (especially teenage boys who wouldn't read higher-brow novels) to read.

Tropes that feature in his works include the following: