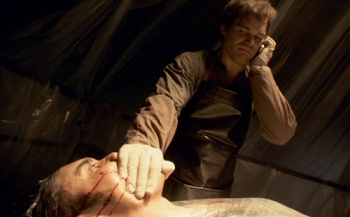 Do you mind, I'm on the phone.
Daina: Isaac! I don't think I can–
Isaac: NOT NOW!
— Dead Space 2, in the middle of your first encounter with undead space velociraptors made from the remains of twin children and dead dogs

Cell phones are wonderful conveniences that make it easier for human beings to stay connected to each other. That said, it's inevitable that every so often they will ring at the most inconvenient times. Like when you're driving, or about to have sex, or in a board meeting. Or, occasionally, when you're in a dangerous, stressful situation like a gunfight or a car chase.

Rather than becoming a break in the action, the hero will inevitably answer the phone, if only to tell the person on the end that "now's not a real good time to chat." Other times, they hold full-fledged conversations, all the while blazing away with their weapons. Often the phone call will be a minor or mundane thing that contrasts with the deadly action, especially if there's a Secret Identity to maintain.

A subtrope of Casual Danger Dialog. Contrast Mid-Battle Tea Break, where the opponents are perfectly happy to let the distracted party take a break from the fight. Compare Excuse Me While I Multi Task where the one taking the call uses it to showcase how much better they are at close combat than their opponent. Compare Not Now, Kiddo. Will likely result in TV Telephone Etiquette, since if the person being called doesn't have time for the call, then probably don't have time to say "goodbye" either.