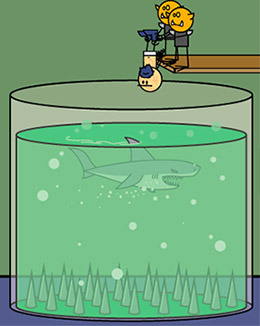 Where did they find an acid-breathing shark?
"Why not otters? I wouldn't mind dropping into a tank of otters. They're fun."
— Ron Stoppable, Kim Possible
Advertisement:

A body of water filled with any variety of unpleasant creatures, such as alligators, killer jellyfish, piranhas, or sharks (with or without frickin' lasers on their heads). Inconvenient heroes and their sidekicks are either suspended over the pool on a slowly-descending rope, or are delivered into it by way of a chute or Trap Door. Also may be used to dispose of henchmen who have failed for the last time.

The hole or vat may contain substances besides water, including molten metal, toxic waste, hot lava, or, for the villain who happens to have a Sweet Tooth, boiling chocolate, caramel, or any sugary or savory food in liquid form. See also Acid Pool.

Compare with Animal Assassin, where the dangerous animals are delivered to the victim rather than the other way around.

See also Fed to the Beast. The Snake Pit is a version with less water and more snakes. Drowning Pit is the critter-free version that does the job with just water. If the animals are just used to dispose of the body after it's been killed by other means, that's Fed to Pigs.

Has nothing to do with the TV series Shark Tank. Nor pool sharks of the billiards table kind.