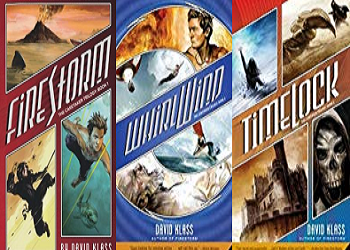 If you were looking for the trope, see The Caretaker.

The Caretaker Trilogy is a sci-fi/fantasy book series by David Klass, which has the interesting distinction of being the first piece of fiction ever to be endorsed by Greenpeace, due to its Anvilicious environmentalism message. The books focus around one Jack Danielson, who gets caught up in a war from the future and battles the forces of evil to save the Earth from being ruined, first by saving the oceans (Firestorm), then the Amazon rainforest (Whirlwind), and the third book (Timelock), had tackled global warming.

As silly and unoriginal as that makes the series sound, the story is very well-written and imaginative. Not least because of its unusual writing structure. It's written almost entirely in sentence fragments. Like this. All the time. Author claims they generate pace. Good pace. Sentence fragments make for fast-paced reading, particularly during the numerous action sequences.