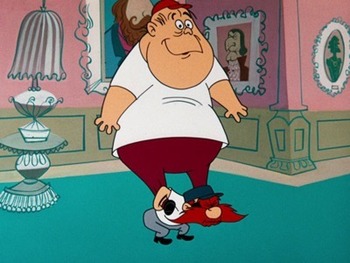 "Honey's Money" is a 1962 Looney Tunes animated short starring Yosemite Sam. It was directed by Friz Freleng. It is one of two cartoons in which Sam starred without Bugs Bunny (the other being Along Came Daffy, in which he co-starred with Daffy Duck).

Yosemite Sam finds out that a local widow has inherited five million dollars. He succeeds in marrying the widow, only to find out that she is a ballbusting shrew who forces him to do all the housework. She also reveals a hulking, dimwitted son that Sam has to look after. Sam tries and fails to get rid of the son, taking a lot of punishment in the process. While he storms out of the house with his bags packed, he concludes that the abuse is well worth five million dollars (whereupon he turns around and goes running back).

This short was the most recent one listed in animation historian Jerry Beck's book The 100 Greatest Looney Tunes, and one of only two released in the 1960s, giving this cartoon an argument as the last great Looney Tunes short of the classic era. The central premise and most of the gags are borrowed from the Daffy Duck cartoon "His Bitter Half", made a dozen years earlier. It was changed to make the stepson more likeable and the stepfather more hatable. There's also reused animation from "Hare Trimmed". Freleng recycled the script and gags yet again for the 1970 Roland and Rattfink cartoon "A Taste of Money".