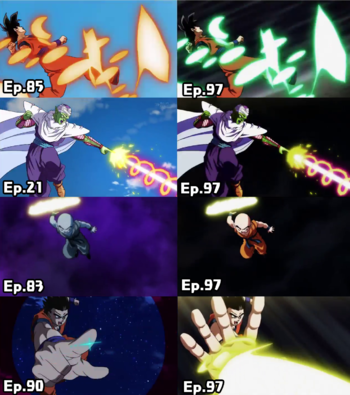 Sometimes, for budget or schedule reasons, you have Stock Footage scenes reused multiple times. But you want to recycle scenes from completely different creations you already made, changing the setting or the characters.

What distinguishes this from Stock Footage is that only part of the artwork is reused, not the entire footage. For example, the same cels used for one scene could be shot against a different background, or the drawings could be recolored on a different set of cels, or redrawn so that you have a different character doing the same action. In CGI, a character model may be altered to create another, or the actions of one character may be programmed onto a second character. While this allegedly is a money-saving move, in some occasions editing pre-existing footage to fit a new scene is actually more expensive than making new footage from scratch.

Often a feature of Limited Animation. Compare with Wraparound Background (when background assets are just repeated over and over). Reused Character Design can coincide with this. A Transformation Sequence is very often either this or Stock Footage, depending on the series. New Work, Recycled Graphics is the Videogame equivalent.

Disney Used extensively by Disney in the days of hand-drawn animation. Most of their most famous films have clearly recognisable scenes repeated by tracing new characters over the existing animation. This was mostly done for more complex scenes such as chases and dancing that involve multiple different characters moving independently, which were by far the most difficult to produce using traditional methods. Worth noting that according to animator Floyd Norman, this is one of the trademarks of Wolfgang "Woolie" Reitherman, and it wasn't really done out of a want to save on time or money, he just wanted to play it safe and stuck to an already-done animation that did the job, hence why most of the Disney examples below are from works he directed.