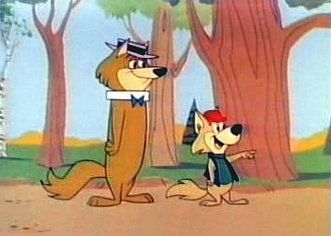 A Hanna-Barbera cartoon about the adventures of a con-artist wolf (voiced by Daws Butler impersonating Phil Silvers) who is always trying to cheat his way into the simple life. He is invariably accompanied by his young, diminutive sidekick, Ding-A-Ling Wolf (voiced by Doug Young in a manner suggesting Buddy Hackett), both of whom are featured as part of The Huckleberry Hound Show in their own segment.