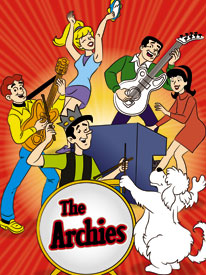 One of the most successful cartoon bands ever.
Archie's here. Betty's here. Veronica, too. Reggie's here. And here comes Jughead, and Hot Dog too!
— "Everything's Archie"
Advertisement:

This Filmation series on CBS was based on the popular comic books, chronicling the comic misadventures of Archie Andrews and his friends in the town of Riverdale.

One element in the TV series not previously featured in the comics was that Archie led a bubble gum rock quintet: He and Reggie were guitarists, Betty was the tambourinist, Veronica was the keyboardist, Jughead was the drummer and Hot Dog, Jughead's canine pet, was the conductor. The Archies released several singles and albums; one of their songs, "Sugar Sugar", was a major hit.