Western Animation / The Sword in the Stone 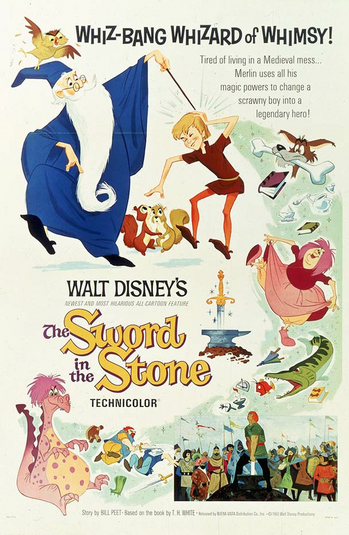 "A legend is sung of when England was young,
And Knights were brave and bold.
The good King had died, and no one could decide
Who was rightful heir to the Throne.
It seemed that the land would be torn by war,
Or saved by a miracle alone
And that miracle appeared in London town:
The Sword in the Stone."
Advertisement:

Disney's take on the tale of King Arthur.

Loosely adapted from the novel of the same name by T. H. White, which became part one of The Once and Future King.

This film version was made in 1963 as the 18th entry in the Disney Animated Canon. At the start of the story, the king Uther Pendragon has died. Soon after, a sword stuck in an anvil atop a large boulder appears in London bearing the words "Whoso pulleth out this sword of this stone and anvil is rightwise King born of England." However, no one is able to succeed at this task, and the throne lies vacant, awaiting a King.

Cut several years later to the main protagonist, twelve-year-old Arthur, an orphan who was taken in and raised by his foster father, Lord Ector. Usually called Wart by his adoptive family, and training to be a squire, he is under the apprenticeship of Sir Kay, his older foster brother. One day, while accompanying Kay on a hunting trip, Wart inadvertently distracts the knight, causing the aim of his arrow to go off target, missing the deer and losing the ammo. The younger boy goes into the forest to retrieve it. While doing so, he accidentally crashes into the house of the magician Merlin. Upon meeting, the wizard declares that he will tutor Wart, a decision that greatly changes the boy's life.

Notably, this film was Walt Disney's penultimate animated film and the last one to be released during his lifetime; he would die three years later during the production of The Jungle Book (1967), which wouldn't see release until ten months after his passing.

A manic witch sings about how she finds delight in the gruesome and grim.

A manic witch sings about how she finds delight in the gruesome and grim.