Not So Omniscient After All 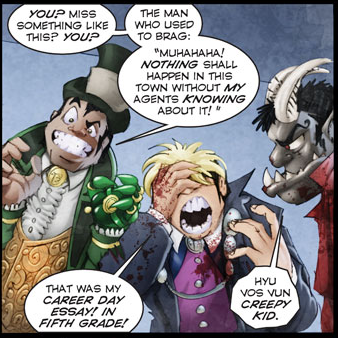 "I have seen everything that has ever happened. Ever will happen. Ever could happen. And yet, what the hell is this?!"
— Uatu the Watcher, What If...? (2021)
Advertisement:

A character that knows everything, except that he actually doesn't know everything.

Maybe he's just a wannabe, a Small Name, Big Ego or Know-Nothing Know-It-All who talked his way into some undeserved credibility. Or maybe he used to be omniscient, but lost his touch - a dethroned Chessmaster who is no longer on top of the Gambit Pileup, a God who surrendered part of his divinity to be able to live among mortals as one of them, or something.

This is the standard way to dethrone an Omniscient Hero so he becomes more interesting, and a common way for protagonists to get to have a chance against something that looked like an undefeatable Invincible Villain.

Not So Omniscient After All is a great way to Deconstruct certain Aesops and moral dilemmas: Make them fall apart by showing how complex the world can be and how hard it is to overview a situation without overlooking a lot of stuff that can prove relevant later on.

Compare What If God Was One of Us?

Alternative Title(s): Know It Most