King in the Mountain 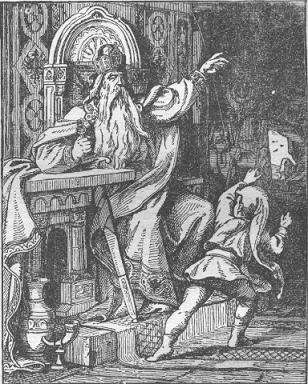 Frederick Barbarossa stirs, sending a boy to see if there are still ravens flying about the mountain; he will wake when there aren't.
"Welsh legend holds
That should Wales ever need someone bold
I'll rise up to help them — mind you, I'm six hundred years old!"
— Horrible Histories, "Owain Glyndŵr"
Advertisement:

A legendary form of Faux Death: the Long-Dead Badass is not really dead, but asleep. Usually, but not necessarily, under a mountain. Islands and a Magical Land are other possibilities. At any rate, somewhere difficult to access.

He will come again in his country's hour of need to play Big Damn Heroes Up to Eleven. The original folkloric motif generally referred the hero's awakening to The End of the World as We Know It; the rise of nationalism altered the focus from the entire world to merely the nation.

The implicit power is such that this trope is usually not played out to the end; the king is alluded to, or seen asleep, but seldom wakened during the course of a story.

See also Awakening the Sleeping Giant, which comes into play when it does happen; while not technically neutral, they are effectively so because they are not in the fray. Sister Trope to Sealed Good in a Can and Sealed Badass in a Can; they overlap in those rare stories where the king does wake. Compare Sealed Evil in a Can. Compare Present Absence, Rip Van Winkle, Year Outside, Hour Inside, and Stumbling Upon the Lost Wizard.