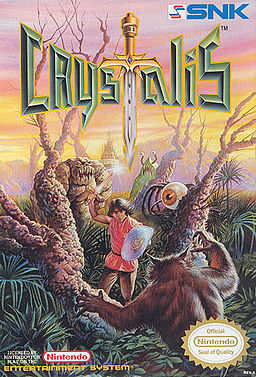 Crystalis (known as God Slayer: Sonata Of The Far-Away Sky in Japan) is an Action RPG created by SNK on the Nintendo Entertainment System in 1990. It begins about a century after a nuclear war that destroyed most of humanity and sent all of its inhabitants back to the metaphorical Middle Ages. To prevent this from happening again, the survivors built a floating tower to allow people to govern from high above. However, the evil emperor Draygon, using magic and up-until-now-forbidden science, has assembled an army and plans to Take Over the World by accessing the tower.

The hero is a young boy who was frozen in a cryogenic sleep. With the aid of four sages, he learns that the world is about to be doomed again, and that he will need to find four elemental swords to fight Draygon's army and prevent him from making his goal of conquering the Tower a reality.